Happily Letter After by Vi Keeland and Penelope Ward 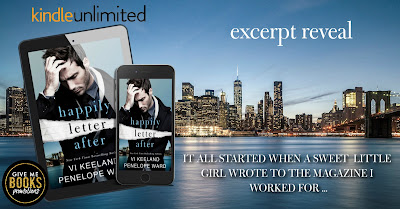 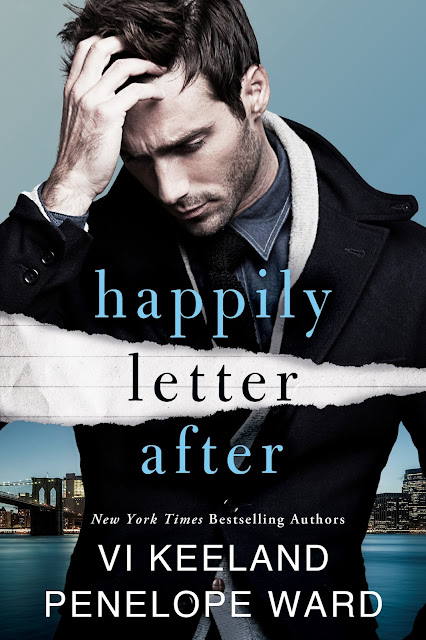 From New York Times bestselling authors Vi Keeland and Penelope Ward comes a love story about taking chances and the surprises that come with them.
My love story all started with a letter.
Only it wasn’t from the man I’d eventually fall in love with. It was from his daughter. A sweet little girl named Birdie Maxwell who’d written to the magazine that I worked for.
You see, once a year my employer fulfilled a few wishes for readers. Only that column didn’t start up again for months.
So I fulfilled some of her wishes myself. It was harmless…so I thought. Until one day I took things too far.
While anonymously granting yet another of Birdie’s wishes, I got a look at her father. Her devastatingly handsome, single dad father.
I should have stopped playing fairy godmother then. I should have left well enough alone. But I just couldn’t help myself. I had a connection to this girl. One that had me acting irrationally.
Like when I showed up on their doorstep. 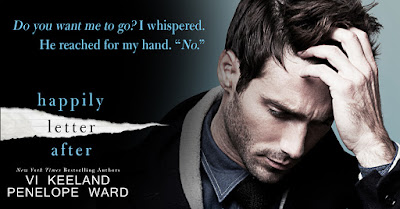 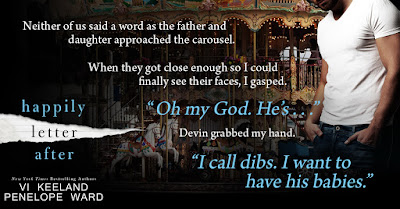 EXCERPT
Copyright © 2019 by Vi Keeland and Penelope Ward
“I cannot believe we are doing this.” Devin and I took the C train to Columbus Circle and stopped at Starbucks before walking over to the carousel. My partner in crime came dressed for surveillance, wearing head-to-toe black, dark sun- glasses, and a wool cap . . . in July. We were lucky it was New York or she might look like the weirdo she is. I, on the other hand, had on jeans and an Aerosmith T-shirt. Because . . . you know . . . Steven Tyler and those lips. I didn’t even care he was probably pushing seventy. I’d still suck on those babies.
We took a seat on a bench located to the right of the carousel—not directly in front of it but where we could still see everyone who walked in and out. As we got into position, I started to feel really bad about what we were about to do—invade little Birdie’s privacy.
“Maybe we shouldn’t do this.”
Devin put her hand on my shoulder and applied pressure—just in case I tried to get up. “We’re doing this. Don’t even try to make a run for it.”
I slouched back onto the bench. “Fine.”
We sat for the better part of an hour, sipping coffee, gossiping about work, and looking around for a little girl and her dad. When I caught the time on my phone, I said, “It’s after eleven. I don’t think they’re coming.”
“Let’s give it until eleven thirty.”
I rolled my eyes. But screw it, we were in this far—I might as well go along with the rest of the ride. Otherwise, Devin would never let me hear the end of it. At eleven thirty on the dot, I stood. “Let’s go, Lacey.”
“Who?”
“Cagney & Lacey. It was a show my mom used to watch when I was little. It had two women detectives.”
“Well, which one was hotter? Maybe I don’t want to be Lacey.”
I laughed. “You can be whichever one you want to be.”
I turned to throw out my coffee cup in the basket next to the bench and was just about to start to leave when I spotted a little girl and a man who had just turned into the entrance of the park. They were pretty far off, but I thought it could be Birdie. “Oh my God. Sit! Sit! I think that’s them.”
The two of us planted our asses back on the bench at the same exact time. Devin leaned forward and squinted. “Are you sure?”
I grabbed her arm and pulled her to sit back. “Don’t be so obvious.”
We watched, while completely failing at looking casual, as the man and the little girl moved closer. The man was tall, broad-shouldered, and had on a pair of jeans and a T-shirt. He was holding the hand of the little girl. And she had on . . . a bodysuit and tutu. It was definitely Birdie!
“Oh my God. It’s them!”
Neither of us said a word as the father and daughter approached the carousel. When they got close enough so I could finally see their faces, I gasped. “Oh my God. He’s . . .”
Devin grabbed my hand. “I call dibs. I want to have his babies.”
I couldn’t believe my eyes. While I was expecting a modern version of my dad twenty years ago, the man standing before me was anything but. For the record, my dad is awesome, and he’s not too shabby-looking. But this man . . . was . . . drop. Dead. Gorgeous. Wow. Just . . . yeah. Wow.
Sebastian Maxwell had dark hair, bone structure to die for, and full, beautiful lips. I’d joked how Devin thought the guy was a super- model, but this man could actually be a supermodel. He had that longish, messy hair—the kind that he could drag a hand through, and it would look like he’d been both thoroughly fucked and just finished a photo shoot. Yeah, that was him. I was absolutely, positively speechless.
VI KEELAND

Vi Keeland is a #1 New York Times, #1 Wall Street Journal, and USA Today Bestselling author. With millions of books sold, her titles have appeared in over a hundred Bestseller lists and are currently translated in twenty-five languages. She resides in New York with her husband and their three children where she is living out her own happily ever after with the boy she met at age six.
FACEBOOK
PROFILE / PAGE / GROUP
WEBSITE
TWITTER
INSTAGRAM
GOODREADS

Penelope Ward is a New York Times, USA Today and #1 Wall Street Journal bestselling author of contemporary romance.
She grew up in Boston with five older brothers and spent most of her twenties as a television news anchor. Penelope resides in Rhode Island with her husband, son, and beautiful daughter with autism.
With over two million books sold, she is a 21-time New York Times bestseller and the author of over twenty novels. Her books have been translated into over a dozen languages and can be found in bookstores around the world.
FACEBOOK
FACEBOOK GROUP
INSTAGRAM
TWITTER
OTHER BOOKS BY VI & PENELOPE 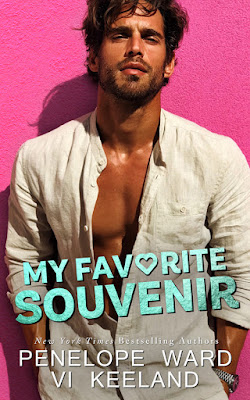 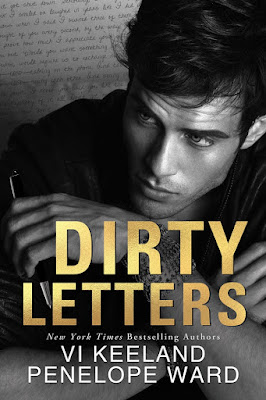 Posted by Stephanie at 5:00 AM